Backdrop to the research

The fiscal year 2016-17 promises to be a watershed moment for financial reporting by Indian corporates. After much delay and deliberation Indian Inc. embraced to a bespoke version of International Financial Reporting Standards (‘IFRS’) aka IND AS. The IND AS were moderated from the IFRS predominantly with the objective of a) customizing it to the Indian context and b) to ease the pain of First-Time Adoption by Indian companies.
In accordance with the applicability waterfall laid down by the Ministry of Corporate Affairs, the big-boys of India Inc. underwent the challenge of first-time adoption and experienced the convergence impact during the April-June quarter of 2016-17. We endeavour to holistically evaluate this impact and identify certain trends that may have arisen give such a mammoth conversion exercise.

Approach to the research

The April-June 2016-17 quarter marked the first set of results after the IND AS came into effect this year. Companies falling in Phase-I of the convergence roadmap converged during this quarter. For the purpose of this research, we evaluated the results of Phase-I companies that form a Nifty-50 companies. The Nifty-50 is a representative group of top 50 companies listed on the National Stock Exchange by market capitalization. Banks, insurance and financial sector companies were excluded because IND AS does not apply to them yet. Accordingly, a total of 40 companies were considered in this analysis (‘Coverage Group’).

In accordance with SEBI requirements, companies under the Coverage Group published results of Q1-2016-17 along with comparatives of Q12015-16. These companies also presented a reconciliation of profit as a comparison between published Q1-2015-16 results and the recasted Q12015-16 results (published in Q1-2016-17 disclosure).

It is worthwhile to note that companies were required to provide a reconciliation of material items that impacted the profit\loss of the respective company and accordingly, there could be various other regroupings and reclassifications that may not be covered by such a reconciliation disclosure. Further, owing to SEBI exemption available for the first two quarters many companies have chosen not to provide a equity reconciliation or balance sheet reconciliation. This analysis has been broken up into three sub-parts being,

a. Impact on different components of financial statements
b. Industry sector-wise impact
c. Accounting standard-wise and other impacts

a. Impact on various components of financial statements:

1. Impact on Revenue – The revenue for the companies under Coverage Group Q1-2015-16 was higher by INR 4846 crores under the new norms which represents a 0.73% increase over the earlier published quarterly numbers. 11 out of 40 companies recorded an increase in revenue. However, their gains far exceed the losses by 24 companies that recorded the revenue decline. 5 companies reported no change.

The companies under the Coverage Group have adopted differing stands regarding the disclosure of Excise Duty. Whilst 34 companies chose to present excise duty as a part of Revenue 6 companies have disclosed the same as a part of expenditure. 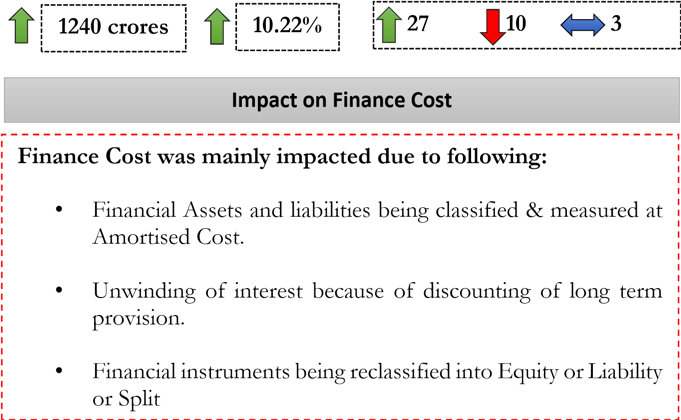 Employee Benefit Costs was mainly impacted due to following:
• Re-measurement of employee benefit plans.
• Fair value of ESOP against intrinsic value recorded earlier
• Actuarial gain or loss which will now form a part of OCI
(Other comprehensive income).
4. Impact on Tax Expense – Out of 40 companies, 25 companies have reported a decrease in net tax impact and 15 companies have reported an increase in net income tax expense. Overall for the Coverage Group there is a decrease in tax expense of INR 1166 crores as resulted into a decrease by 5.14%.

Tax Expenses was mainly impacted due to following:

• Change in the method of calculation of DTA/DTL from profit & loss to balance sheet approach.
• Change in criteria of recognising deferred tax assets (DTA). DTA is now recognised on a probability test against virtual certainty test.
• Creation of deferred taxes on unrealised profit and on undistributed profit.

5. Impact on Profit after Tax – Overall companies forming a part of the Coverage Group witnessed an increase in reported profit after tax by INR 578 crores as resulted into 1.08% increase for June 2015 quarter. Out of 40 companies 25 reported decline in profit, 15 has reported increase in profit. The net impact has been a mixed bag indeed with a very nominal overall impact.

Basis the quarterly results disclosed by companies, more than 62% of the companies experienced less than a 10% impact on their net profit. Evidently this large percentage indicates the impact of Ind AS being minimal in many cases, however, this impression may not be completely correct as much of the impact would have been moderated by the various exemptions availed by the companies for first-time adoption. It is worthwhile to note that IND AS provide for various additional firsttime exemptions as compared to pure-breed IFRS. In many cases, the net profit impact though not significant, there could be meaningful impact on individual accounting line-items. For example, netting of sales promotional items with revenue may have no impact on net profit but will have a significant impact on revenue. A large majority of companies have not disclosed such reclassification adjustment, though we expect the annual reports to carry such a detailed disclosure. 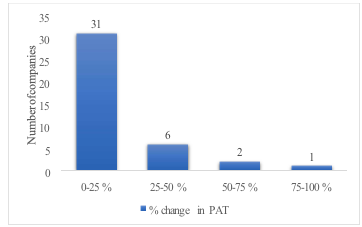 Another measure of operational profitability EBITDA (Earnings Before Interest Tax Depreciation and Amortization) was down by INR 6810 crore which on and average accounts for 5.83% decrease. EBITDA has been calculated after other income.

In our analysis we evaluated the sector-wise impact on key industry sectors on account of IND AS conversion. Below is the summary of the impact:
1. Impact on Pharmaceutical and healthcare sector

Overall, companies belonging the pharmaceutical and healthcare sector have reported decline in revenues. However, these companies have reported reduction in tax liability. In aggregate companies in this segment have reported a positive impact on overall Profit After Tax by 6.20%.

• Impact on account of Business Combinations is a focus area on account of purchase price consideration allocation method adopted. Apart from goodwill and other intangibles, acquired in-process research and development needed to be evaluated for capitalisation.

• Creation of deferred tax assets on business losses and on unrealised profit.

• Out-licensing agreements lead to deferment of revenue in line with corresponding obligations. Other regular sales agreements like multi party agreements where component of sales to be unbundled and recognised separately at the time of performance.

• Revenue also gets affected by related sales promotion and incentives as well as potential returns, all of which is required to be estimated and reduced from sales.

• Contract manufacturing agreements needed evaluation to determine if these are in-substance lease of those facilities.

2. Impact on Technology, media and telecommunication sector
Majority of the companies belonging to this sector have reported a negative impact on revenue similar as Pharmaceutical and Healthcare sector. These companies have shown decrease in Net profit by 2.89% on an overall basis. It is worthwhile to note that a few companies under this sector were also converged to IFRS for international reporting purposes and accordingly the overall impact is muted.
Impacts –

• The sector evidences fair amount of inorganic growth and therefore acquisition related accounting has been impacted. Acquired intangibles will be accounted at fair value and, unlike goodwill, are generally amortized and will impact. Further, goodwill from past acquisitions, which may represent finite life intangibles, may have a potential impairment cost.

• Employee stock options and other stock based structures are affected Net Profit. Customer contracts, especially when there are multiple elements also impacted revenue.

• Deferred tax on undistributed earnings of subsidiaries has also a visible impact on companies under this sector.

3. Impact on Engineering & Infrastructure sector
Majority of the companies belonging to this sector have reported positive impact, cumulating to impact on EBITDA of 14.28%, however a negative impact has been reported on net sales & overall total comprehensive income of 15.70% due to higher charge on finance cost of 83.9%.

Impacts-
• One company has reported Rs.168.66 crore as a provision for expected credit loss, it has also reported increase in employee benefit cost on account of constructive obligation.

4. Impact on Oil & Gas sector
Companies belonging to this sector have reported an increase in the revenue, finance cost and a cumulative decline in Net profit of 3.26%.

• Effect on discounting of decommissioning liabilities and unwinding of such liability especially in relation to exploration and production assets.

• Certain companies have opted for fair valuation of certain assets and accordingly the net worth and depreciation have ben impacted.

5. Impact on Power & Utilities sector
Companies under this sector have reported decrease in revenue, finance cost, tax expenses and thus increase in Net profit of 5.67%.

Impacts-
• Companies under this segment usually undertake projects on a BOT, BOLT and other similar models. Accordingly accounting for service concession arrangement has impacted companies representing this segment.

• Tax and deferred tax impacts that affected the other sectors has also impacted companies in the power and utilities segment.

• Adjustment to value of Property, Plant and Equipment and related impact on depreciation has been an impacting area.

• Fair value of derivatives and other hedging instruments has impacted companies in this sector.

• A company in this segment has recognized Embedded lease under one of its contracts.

6 companies have reported Excise duty separately as an expenditure (Gross of Revenue). As a clarification NSE/BSE issued a notification which clarifies that Excise Duty is to be shown as an Expense.
2. Equity Reconciliation as on transition date –

11 companies have provided an explanation for their profit reconciliation and items arising thereon. These explanations provide certain insights into the impacts that arise during the convergence process.
4. Exemption/Relaxation Given by SEBI –

Based on discussion with trade representative bodies, professional bodies and impacting companies, with a view to ease the pain of first-time adoption, SEBI has granted various exemptions to companies. Below is a summary of the exemptions that have been availed by the companies:

The above SEBI exemptions are available for companies under the Phase- II and subsequently as well. Accordingly, it is expected that larger number of Phase-II companies will opt for the exemptions provided by SEBI.

The first shoots seem to suggest that India Inc. has been able to absorb the Ind AS impact atleast on the P&L front. Though there would be exceptions, the broad performance of India Inc. has not been significantly affected by the adoption to IND AS. The extent of impact has been largely influenced by the first-time adoption policies and exemptions chosen. It may be bit early comment on the overall impact as not many companies have disclosed the networth and balance sheet impacts which are expected to be significant. The year-end disclosures will also provide a much better perspective on impact on financial position of the companies and detailed reasoning into the impact that affected the companies. 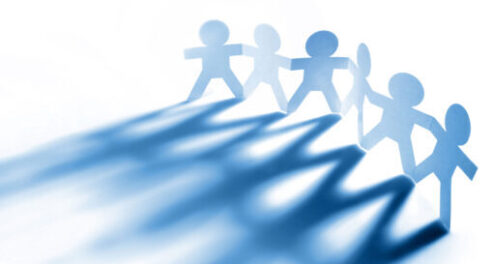